Bougie lessons from the literature and experience

1. This was a Macintosh video laryngoscopy study with the majority of intubations performed using a CMAC with a Mac blade.

2. This study set a new standard for first pass success (FPS) rate in the ED with an overall FPS rate of 98% when the bougie was used as a routine adjunct! The FPS for styletted tracheal intubations was 87%. These numbers compare very favourably to the ‘industry standard’  reported in the literature from registry data, where the historical benchmark for ED FPS has been 84% (Park et al.) These are that much more impressive given this historical benchmark came from large registry data sets which may be biased by self-reporting.

3. Some have questioned the generalizability of the findings from this study based on the fact that this institution had significant training and experience with bougie use as the default primary ED intubation approach. Routine use of the bougie for Macintosh laryngoscopy has been suggested by some educators for many years (AIME slide “When to use the bougie” from 1999) with the argument that routine use of a ‘difficult airway’ adjunct is more likely to be successful if it is routinely used. Routine use of any intervention may be questioned by many as a violation of clinician autonomy, however the advantages in limiting variance in high stakes scenarios such as emergency airway management far outweigh any disadvantages for routine bougie use.
​ 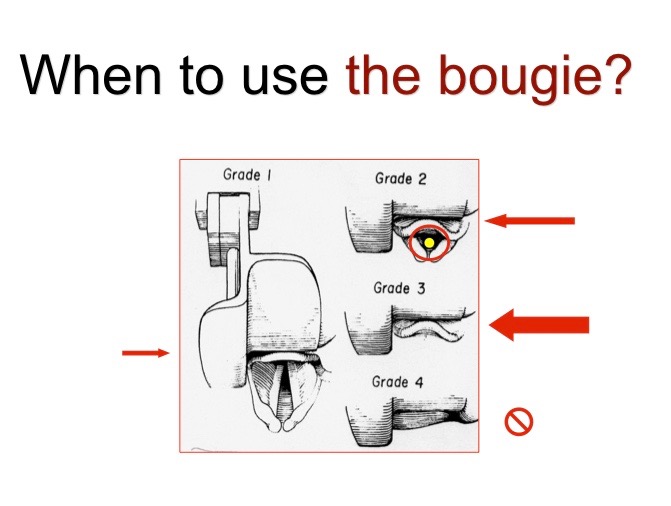 4. The major gain for routine bougie use in this study came from its value in Cormack-Lehane (CL) Grade 2 and 3 airways where there was either no view (Grade 3) or a partial view (Grade 2) of the glottic inlet.

There was no surprise for the Grade 1 & 3 findings and the bougie has been supported by literature as the ‘go-to’ for epiglottis only Grade 3 views for many clinicians for decades (Kidd et al.). Much of the effect of this study and its clinical relevance relates the common CL Grade 2 view where the value of routine bougie use is simply explained by its smaller unobstructing diameter. As the styletted TT approaches the partially viewed glottis it can obstruct the clinicians view which may result in an incorrectly placed tube (see first image below). When the bougie is used in a CL Grade 2 view, because of its smaller diameter, there is no obstructed view of the glottic inlet and the clinician will routinely visualize it enter the trachea (second image). 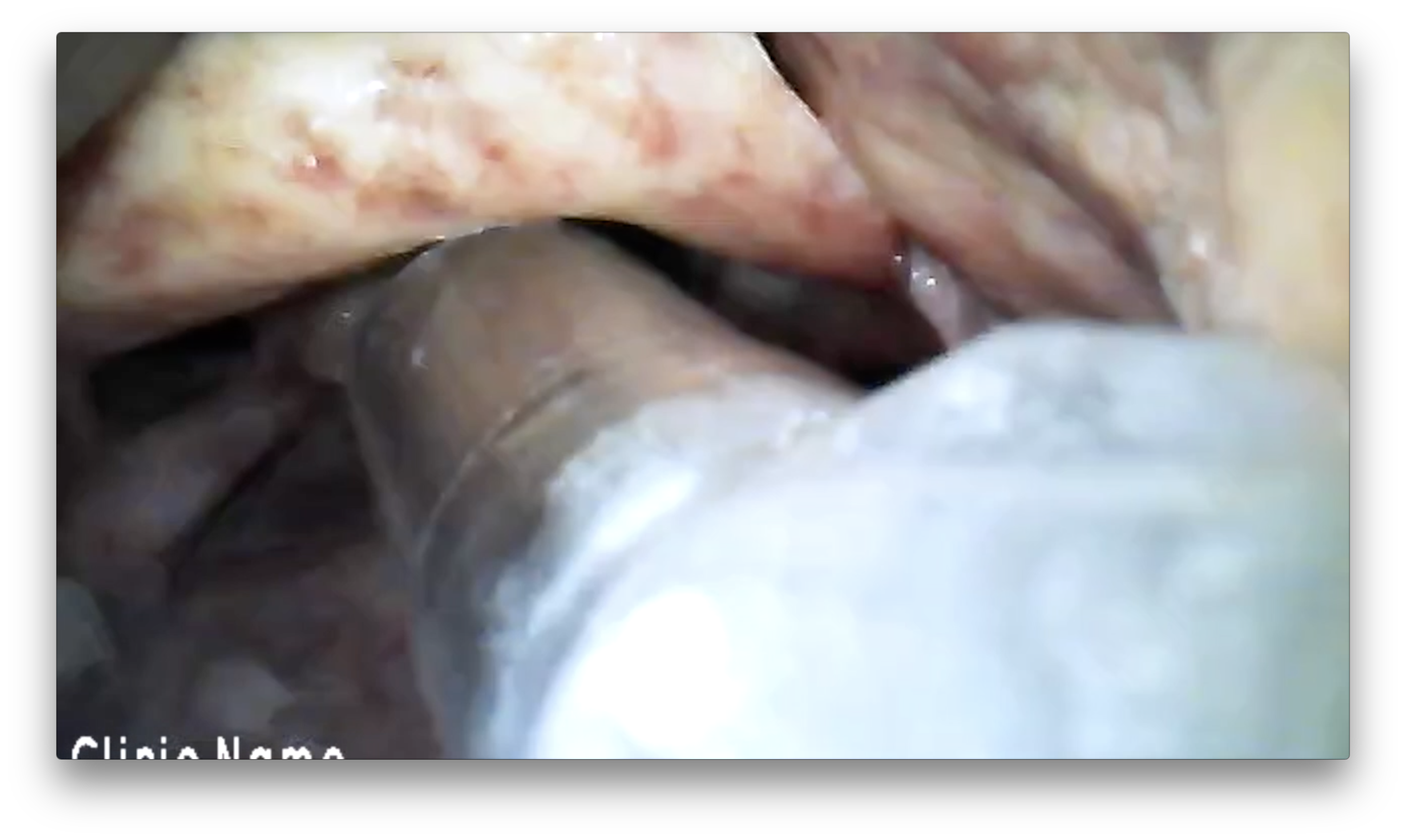 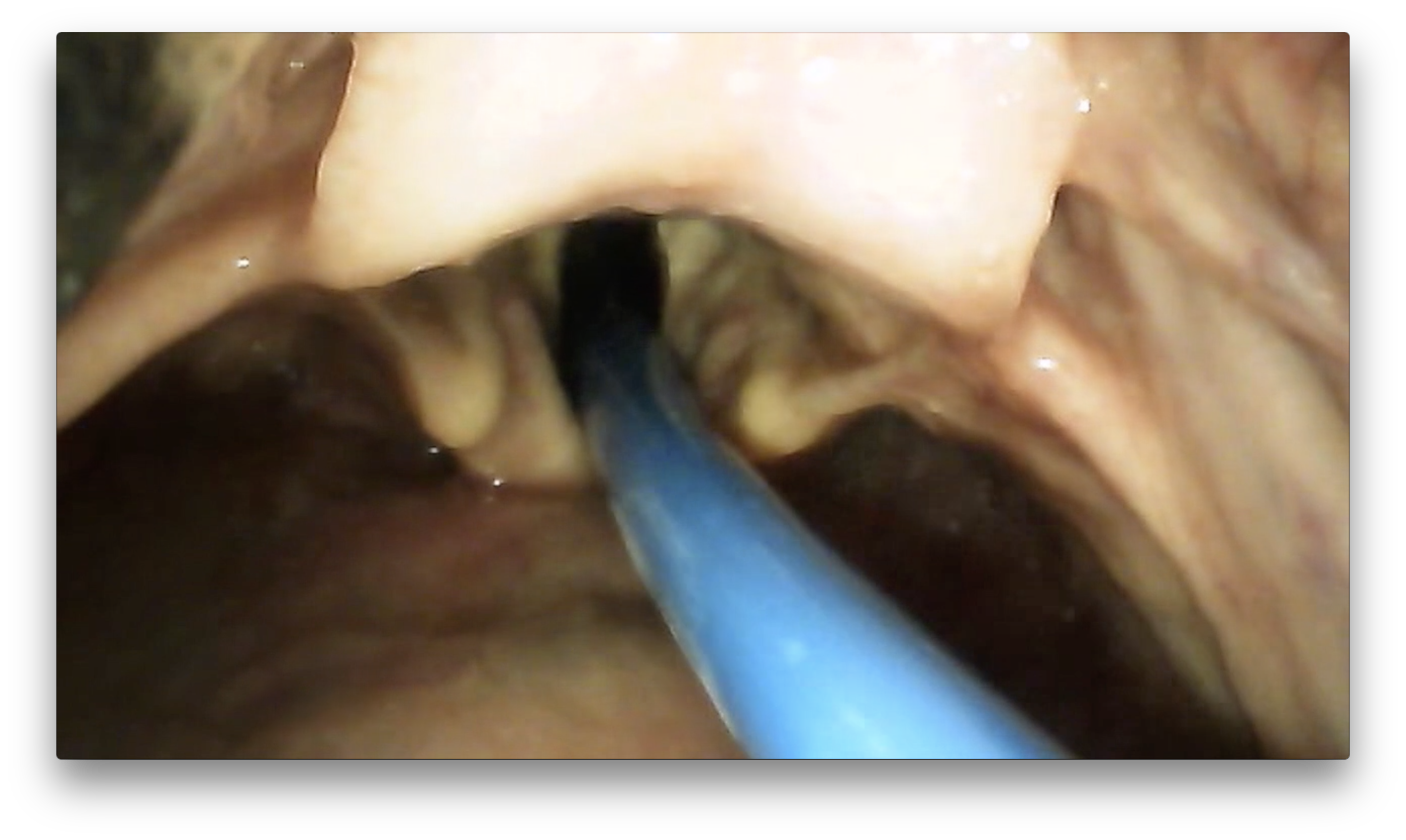 5. Despite using a video laryngoscope for almost all cases (98%) clinicians reported using the Mac device directly (not using the screen) in ~50% of cases (58% bougie group, 49% stylet group). In an another study by the Hennipen group, they reported high FPS rates (94%) with no difference in outcomes whether the Mac device was used as a direct or indirect video laryngoscope (Dodd et al.). DL is not dead, it remains an important option with a completely transferable skill set for Macintosh VL. 6. Tracheal clicks were reported as detectable in 91% of cases and the distal ‘hold-up’ sign in 64%. Grade 1 and 2 views made up 92% of cases and watching the bougie go through the cords may bias the clinician to report a ‘click positive’ placement. This potential bias is in part supported by the fact that distal ‘hold-up’ (bougie stops as the bronchus diameter limits further advancement) was commonly used, an approach that wouldn’t be routinely recommended unless the clinician was not confident with bougie placement. Additionally there was no difference  in complication rates (although not powered for this outcome) with routine bougie use even with the potentially harmful ‘hold-up’ sign being used so frequently. 7. Did I mention this was is a MACINTOSH LARYNGOSCOPY STUDY. These findings have not been validated for use with other video laryngoscopes. There is significant heterogeneity in design amongst VL devices. VL to CMAC users usually refers to the more commonly used Mac blade while VL to GlideScope users most often references a hyperangulated (HA) blade design. A bougie out-of package is a straight device with a coude tip (roughly 30-400 angled tip) and will usually not work with hyperangulated VL devices. 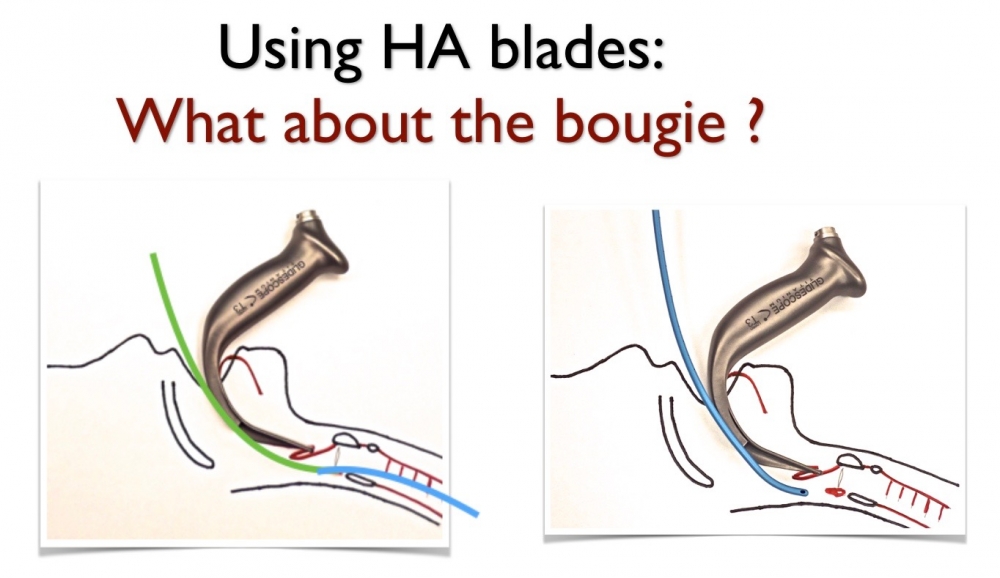 In a recent metanalysis that included the Driver et al. study and 4 other papers, Sheu et al. reported no difference between bougie and stylet facilitated tracheal intubation. As pointed out in a letter by Weingart and Driver, these findings can be explained in part by the inclusion of the Tosh et al. study that compared styltetted TT with a 600  bend to a bougie/TT combination using a ‘CMAC’ video laryngoscope. However the CMAC blade used was the hyperangulated D-blade and for the reasons just described and illustrated above, is not a fair comparison. It’s important to remember that intubation FPS is never about the adjunct alone (stylet or bougie) or the device (type of laryngoscope), it’s about their optimized use in combination AND the skills with which the hands that hold them execute the procedure that will ultimately make a difference and improve airway outcomes. The Driver study proved that clinicians trained and experienced with routine use of the bougie as an adjunct to Macintosh video laryngoscopy will have a high ED intubation FPS rate.

While adjustments can be made to most standard bougies by adding an additional bend to the distal 1/3 of the device (see image below), problems can arise as the rigid bougie comes in contact with the anterior tracheal wall. There are newer malleable or steerable bougies that are entering the market (Universal Stylet Bougie- USB [Rich Levitan] intersurgical, Flexible tip bougie Sharn inc Anesthesia) which may prove to be effective for use with a hyperangulated VL device. 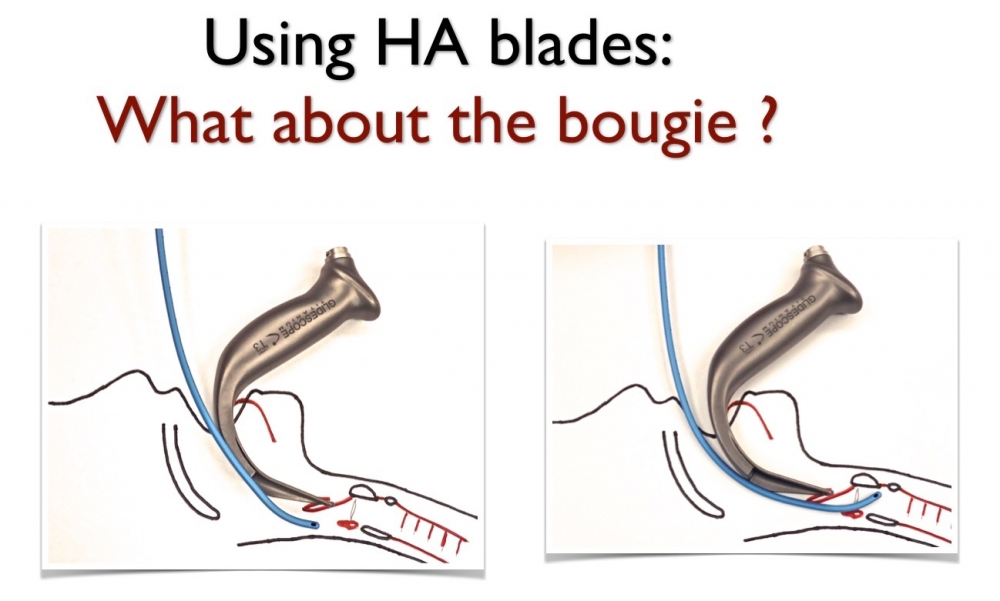 8. Whether luck or experience, it is somewhat hard to reconcile the 3/3 success rate for the bougie in Grade 4 views in which there is no ‘in-view’ anatomic reference for the glottic inlet. In general, blind placement of the bougie has historically been met with poor success rates and is not recommended. Similarly the success rate for 3B views is poor where the epiglottis is visualized but displaced towards the posterior pharyngeal wall (Kovacs et al.). This Grade 3B view is often iatrogenic and not based on the patients native anatomy or acquired pathology, caused by an incorrectly distally placed blade tip in the vallecula that results in a posterior displaced epiglottis. 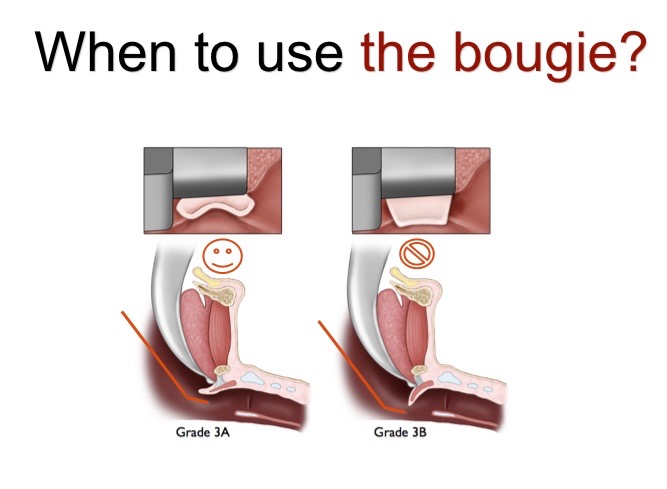 ​
9. It is well known that the right leading edge of the TT bevel can cause problems, getting caught on right sided  glottic structures (aretynoids, cords) occurring in 7% of cases in the Driver et al study (first video). While all but one case was remedied by pulling back the TT, 90o counterclockwise rotation and readvancement, a better approach is to routinely perform this rotation of the advancing TT over the bougie BEFORE it becomes an issue (second video).

10. Lastly, the authors should be applauded for reporting what should be the standard metric of FPS rates without hypoxemia (85% [bougie] vs 77% [stylet] for all and 82% vs 69% for patients with difficult airway characteristics) instead of FPS alone.
A final word of caution: There is slight variance in blade designs between Macintosh VL devices and while an out of package (straight-to-coude tip) bougie should facilitate a high first pass success, clinicians should practice this combination routinely with their chosen Macintosh VL device.
​The three most commonly used Mac VL devices are:
-Storz C-MAC® S with single-use Macintosh 3 or 4 blades;
-GlideScope ® Spectrum™ with single use [Macintosh-shaped] DVM 3 or 4 blades;
-McGrath Mac with single-use Mac size 3 or 4 blades.