Excerpts from Airway Physiology and Anatomy: A Deep Dive Chapter in Airway Management in Emergencies the Infinity Edition

A clear mental picture or "gestalt" of upper airway anatomy is an essential cognitive underpinning to emergency airway management skills. For those patients presenting in extremis or with a decreased level of consciousness it may not be possible for the clinician to perform a complete airway examination. However, much can be gleaned by a systematic visual inspection of the patient that may help the clinician in managing the airway:

A. Making decisions. Assessment of a patient's airway anatomy is the foundation upon which the airway plan is built. If induced and paralyzed, can the patient be ventilated with bag-mask ventilation (BMV)? Intubated by direct- or hyperangulated blade videolaryngoscopy? If difficulty is encountered, can rescue oxygenation occur via an extraglottic device or cricothyrotomy? Based on this assessment, the clinician can decide how to proceed: with a rapid-sequence intubation (RSI), an awake intubation, or primary surgical airway.

B. Structure and function. Knowledge of airway anatomy and its dynamic changes facilitates the appropriate performance of airway opening skills and BMV. These skills depend on an understanding of functional airway anatomy: how the tissues behave with the patient in either the awake or obtunded state.

C. Landmark recognition. A sound three-dimensional appreciation of the laryngeal inlet and its surroundings is critical for optimal laryngoscopy. Anatomic structures adjacent to the glottic opening, such as the epiglottis and paired posterior cartilages help provide a "roadmap" to the cords. The anatomic or pathologic variations in airway anatomy depending on pathology must be understood and anticipated (i.e. the ability to go 'off road' and still be oriented).

D. Spatial orientation. Particularly when using blind or indirect visual tracheal intubation techniques, a clear mental image of the anatomy through which the instrument is traveling is required. Problem solving through intubation with a video laryngoscope or through an intubating laryngeal mask airway is much easier with a solid appreciation of potential anatomical barriers.

The clinician should be very familiar with the component parts of the laryngeal inlet that are visually presented at laryngoscopy (Video 1).

The paired vocal cords are the "target" for the laryngoscopist and are identified by their whitish color and triangular orientation. Surrounding the vocal cords, the laryngeal inlet is bordered anteriorly by the epiglottis, laterally by the aryepiglottic folds, and posteriorly by the cuneiform and corniculate tubercles (posterior cartilages), and the interarytenoid notch (Fig. 7). 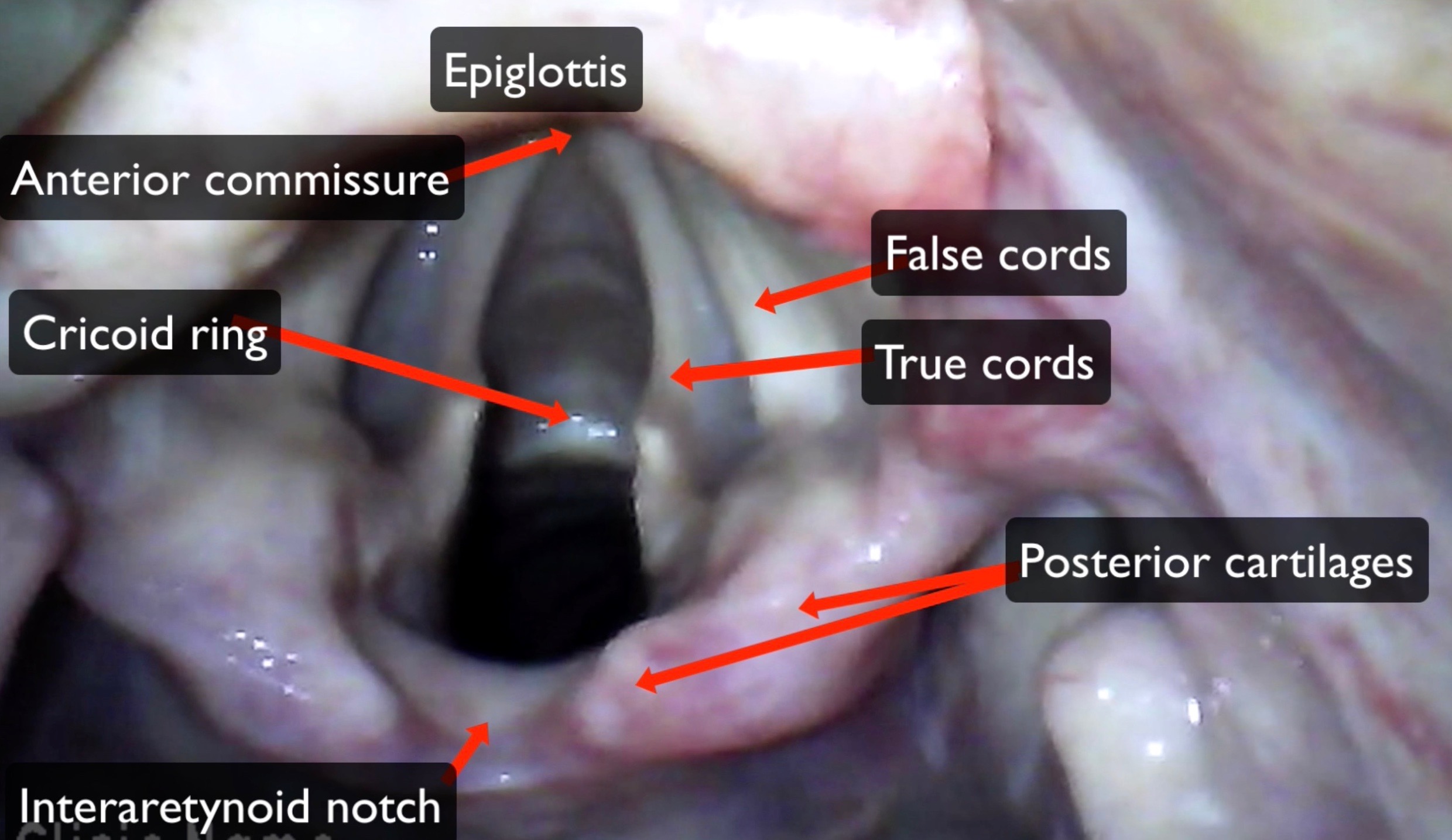 The epiglottis projects upward and backward, behind the hyoid bone and base of tongue, and overhangs the laryngeal inlet.[22] The superior surface of the epiglottis is attached to the hyoid bone by the hyoepiglottic ligament (Fig. 3), while the inferior surface attaches to the thyroid cartilage via the thyroepiglottic ligament. The overlying mucosa on the upper surface of the epiglottis sweeps forward to join the base of the tongue, with prominences forming the median and paired lateral glossoepiglottic folds. The paired valleys between these folds are called the vallecullae, although both vallecullae are commonly referred to together as the vallecula (Fig. 3 & Fig. 5, Video 2).

The epiglottis should be actively sought by the laryngoscopist (epiglottoscopy) as a guide to the underlying glottic opening.[23] To expose the vocal cords, the tip of a curved (e.g., Macintosh) laryngoscope blade can be advanced into the vallecula until it engages the underlying hyoepiglottic ligament ('valleculoscopy') (Video 2 & Video 3).

Forward, distal pressure on the hyoepiglottic ligament with the blade tip "flips up" the epiglottis anterior, towards the base of the tongue allowing for a line-of-sight view into the larynx (laryngoscopy). Although the hyoepiglottic ligament itself is not necessarily visualized, one can often see the midline glossoepiglttic fold (Video 2). The hyoepiglottic ligament 'lives' underneath this fold. With correct placement of the blade tip, the glossoepiglottic fold should not be visualized. This precise placement of the blade tip into the base of the vallecula that results in engagement of the ligament is a likely explanation of why a skilled laryngoscopist may achieve a much-improved view (with less force) on a patient after a less experienced clinician has struggled. Attempts to lift the tongue prematurely, before the hyoepiglottic ligament is engaged at the base of the vallecula, will often result in an inadequate view of the glottic inlet (Video 2 & Video 3). Clinicians preferring straight blade direct laryngoscopy usually elect to place the blade beneath the epiglottis and directly lift it. Either way, the epiglottis is an important landmark in airway management and should be a source of reassurance, not anxiety.

Originating laterally from each side of the epiglottis toward its base, the aryepiglottic folds form the lateral aspect of the laryngeal inlet by sweeping posteriorly to incorporate the cuneiform and corniculate cartilages. The corniculate cartilages overlie the corresponding arytenoid cartilages, and appear as the characteristic "bumps" (tubercles) posterior to the vocal cords. In practice, many clinicians refer to these prominences as the arytenoids. Confusion can be avoided by referring to the tubercles collectively simply as the "posterior cartilages" (Fig. 6) The underlying arytenoids are anatomic hinges used by laryngeal muscles to open and close the vocal cords. Between and slightly inferior to the paired posterior cartilages lies the interarytenoid notch (Fig. 7, Video 1). With the cords in the abducted position, this notch widens to a ledge of mucosa stretching between the posterior cartilages, but with the cords in a more adducted position, the interarytenoid notch narrows simply to a small vertical line. The interarytenoid notch is important during laryngoscopy because, in a restricted view situation, it may be the only landmark identifying the entrance to the more anteriorly located glottic opening.[23]

Posterior to the laryngeal inlet lies the esophagus. It should be noted that the entrance to the upper esophagus is not held open by any rigid structures, and at laryngoscopy is often not seen at all. Conversely, when the esophageal entrance is seen, it can look like a dark (and sometimes inviting) opening (Fig. 8). With enough pressure exerted, the sidewalls of the esophagus can appear pale, imitating the appearance of the vocal cords. This so-called 'glottic impersonation' is particularly true in the neonate.[24] This highlights the importance to the laryngoscopist of knowing the expected landmarks of the laryngeal inlet: the posterior cartilages, aryepiglottic folds and overlying epiglottis surround the glottic opening, and not the esophagus! 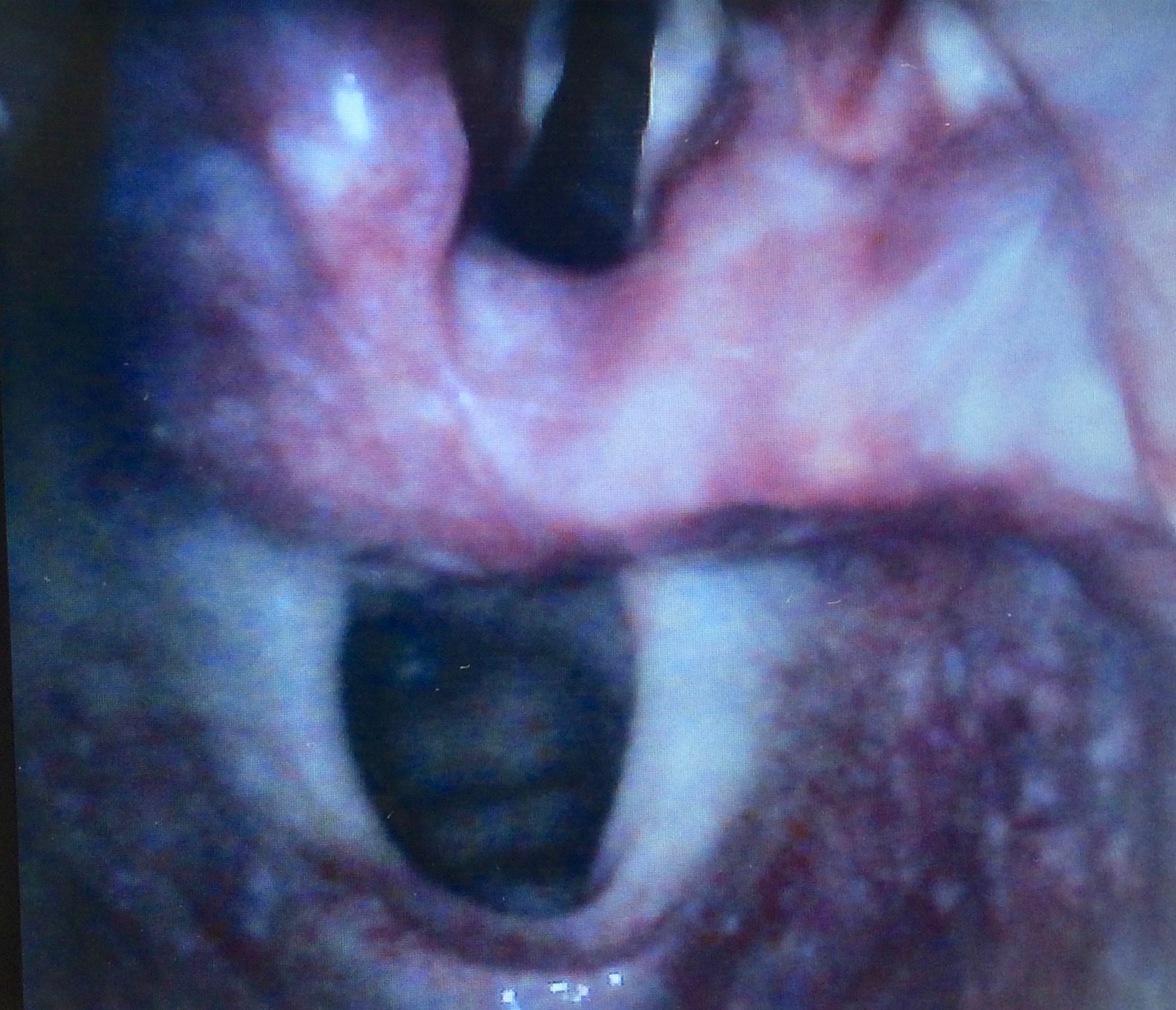 Figure 8:  The esophagus can look remarkably like a glottic inlet if one is just looks for a patent hole. Identifying the surrounding structures of the glottic inlet is critically important during laryngoscopy.