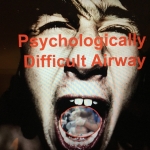 Thanks for the great feedback from my talk at the Society for Airway Management Meeting in Atlanta. Here is a link to the slides.

Heres an excerpt from the chapter entitled Human Factors in Emergency Airway Management from our upcoming 3rd edition of our textbook.

Emergency Airway Management: Psychological Barriers and Human Factors
Successful airway management requires an integration of knowledge and procedural skills with a range of non-technical skills that are referred to as human factors. Human factors analysis seeks to understand the capabilities of human performance – performance that is affected by factors including stress, ego, fatigue, cognitive biases, errors in perception, estimation, communication, and numerous others

Managing a difficult airway will inevitably be emotional and produce feelings of anxiety and may lead to a dysfunctional self-preservation response and a resultant negative outcome. In managing a critically ill patient with an unanticipated difficult airway, the clinician may persist with their laryngoscopy attempt despite the sounding alarms of rapidly falling saturations. There are numerous reasons that may explain the clinician’s actions (or inactions). It is usually, however, not a lack of knowledge and in fact the clinician may be too aware of the evidence supporting first attempt success to the point that the technical imperative for success supersedes the clinical priority of oxygen delivery (outcome bias). Socio-evaluative stress from fear of failure and/or condemnation from an observing gallery of team members can be a powerful influence on decision making.

Stress is truly measured by the “eye of the beholder” as a mismatch between the clinician’s assessment of whether they have the personal and environmental resources to meet the demands of a given scenario. When the resources are assessed as sufficient to meet demands, the situation is deemed a challenge and the stress is functional and often beneficial. If resources are appraised to be insufficient to meet the demands then a threat is perceived and the resultant distress may become dysfunctional with adverse outcomes.(LeBlanc, 2009)

Like many physiological compensatory mechanisms, the beneficial effects wane at a certain point.  As stress response continues, an individual can experience deleterious effects.  This non-linear relationship was first explored by Robert Yerkes and John Dodson in 1908 (Their finding demonstrated that, as the level of stress increased, performance improved up to a point of optimal performance.  However, after that point, addition stress caused performance to deteriorate.(Yerkes & Dodson, 1908)

Confidence is a challenging balance between having too much and too little. Having a physical presence in the way you present yourself has the potential to positively affect your performance and that of your teams.(Carney, Cuddy, & Yap, 2010) An active, confident and appropriately vocal and engaging leader is more likely to have team members contribute than someone who is quiet, seemingly uncomfortable and speaks without authority. This assumes that the content of their easily heard words represents competent decision making.

The problem is, however, that the relationship between confidence and competence is non linear.(Pezeshki, 2015)(Kruger & Dunning, 1999) In a series of experiments by the now famed authors Dunning and Kruger, they found that unskilled individuals often remain unaware of their incompetence despite being presented feedback on their poor performance.

Competence The key to attaining skill competence is performing what Ericsson terms deliberate practice, which involves repetitive practice with feedback within an educational context. (K. Ericsson, Krampe, & Tesch-Römer, 1993) For laryngoscopy data has varied from 50-100 procedures required to become acceptably competent.(Buis, Maissan, Hoeks, Klimek, & Stolker, 2015)(Cortellazzi et al., 2015)(Je et al., 2013) However, these numbers may apply only to the “normal patient.” What about the difficult airway?  One size does not fit all and we know that “n” (the number of cases) will vary according to the individual, the skill in question and the context.

Context and opportunities present a major challenge when it comes to learning life-saving and relatively uncommon procedures. While non-anesthetist, acute care clinicians need to be skilled in managing the toughest of airways, the intubation rate per clinical hour for a practicing individual may be quite low (1-3/month/MD, 0-1/6 months/Paramedic). This low clinical exposure rate is often further affected by the presence of multiple learners in need of intubation experience.  For cricothyrotomies, many clinicians will never have the opportunity to perform one. This high-acuity, low-prevalence gap is where simulation has come to play a major role.

Simulation has the potential to distance unhelpful affective components from the learning process. Its effectiveness in part depends on its ability to reproduce a relevant patient care-related stress. Performance anxiety related to socio-evaluative stress, in contrast, is not a fostering substitute for managing patients in a crisis scenario. Simulation without the undesirable anxieties of learning on a real patient is important for the initial phases deliberate practice. The implied “permission to fail” enables learning to proceed under more optimal conditions. How to use failure to facilitate learning and improve outcomes is somewhat controversial.

Airway Adverse Events and Clinical Decision-Making Bias
Awareness and concern regarding medical error has increased over recent years. The language and terminology describing error, adverse events, and complications is at times confusing, but collectively describes patient safety issues. To improve patient outcomes, it is helpful to understand why things “go bad.” clinical decision-making can be complicated and is subject to various biases that may lead to unintended outcomes.  Croskerry has described the many potential clinical decision-making failures that occur in the emergency setting.(P Croskerry, 2002) Many of these are applicable to airway management:

Addressing Human Factor Challenges
Despite the challenges that Human Factors present to emergency airway management, certain strategies can be applied to compensate for our innately-human shortcomings. Dr. Clifford Reid has suggested these issues can generally be organized into four categories: self, team, environment/equipment, and patient.

Self. Law enforcement, the military and athletics are examples of high-stakes occupations that teach psychological skills to improve performance under stress.  As other professions have done, a comprehensive set of Performance-Enhancing Psychological Skills (PEPS) can be specifically adapted to resuscitation and emergency airway management.

The airway team. Emergency airway management success requires a team effort.  The cognitive effects of stress on individuals may be compounded or compensated by other team members. Attention narrowing creates a potential series of silos with a loss of central authority and lack of communication. The critical features of effective teams include:
“Annie, you’re on airway. Let’s start with HFNO using prongs and BVM with a PEEP valve; don’t bag for now. Tom, start an IV in the right antecubital fossa and tell me when the 500 cc bolus is running.”
“Joan, move to the head of the bed to help Bob with 2-hand bag mask ventilation, and,Tom, looks like it’s a tough IV.  Move to a tibial IO.”
“IO looks to be running well. We’re going to have to move on to do an RSI. Tom, can you prepare 100 mg of ketamine and 100 mg of rocuronium please? Annie, what’s your assessment of the airway?”
“Before we go ahead, let’s review. Annie, tell me tour plan A,B and C. Tom, you’re pushing the drugs,  giving us 15-second time updates and watching the monitors. Annie, Tom, are you OK with this plan? Do you have any questions?”
“Annie, that’s OK. The patient’s easy to bag. Sats are stable, we have time. What did you see?”

Environment/Equipment. “Geography is destiny” they say. Intubation success rates will differ based on clinician experience, patient condition, and environment. First-pass success rates are higher in the OR than in the emergency department, which in turn are higher than the prehospital setting.

Patient. Ultimately, our ability to influence patient outcomes is determined by our actions and, perhaps more importantly, our decisions. Algorithms are often binary, “difficult or not,” but in the real world there are many shades of grey. Making the best decision for the patient may not be the best for the clinician as per the situation where an awake intubation is indicated, but the clinician may be biased to perform an RSI as that’s what they are most comfortable with.