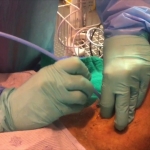 There have been a few emergency surgical airway (ESA) success stories communicated by way of twitter and by email of recent. Great work done by great people. Time for reflection and sharing some pearls for front-of-neck emergency airway management.

The Difficult Airway Society (DAS) recently updated their guidelines and made very specific recommendations regarding emergency “front-of-neck access”. While many would argue that there is clinical equipoise when comparing needle versus scalpel ESA techniques, the balance of opinions has come out in favor of a scalpel technique. The DAS authors felt it necessary to make a specific recommendation to use a bougie assisted scalpel technique. This recommendation in part reflects the perceived need to commit to a standardized approach and help address the most common delay associated with an ESA, the decision to perform the procedure.

There are various methods of performing a bougie assisted ESA. Two specific components of the procedure where the approach may vary relate to the direction and purpose of the initial incision and the method of dilating the incised CTM to accommodate the bougie and ETT. Regarding the initial incision, while some recommend directly entering the trachea if the clinician feels confident that they are able to correctly identify the CTM, we recommend always making a vertical landmarking incision. The reasons are simple, we don’t do this often, our own heart rates will be high enough that our fine motor control may be gone AND regardless of clinician experience and patient gender or size, we suck at finding the CTM (See below). Cut vertically to landmark then enter CTM horizontally.

The second variation of the procedure relates how to proceed once the CTM has been incised. We suggest that after extending the incision through the CTM  laterally in both directions (without removing the blade) the #10 blade should be reoriented into the vertical/sagittal plane (cutting side towards feet).  The wide body/profile of a #10 blade is then sweeped laterally (away from the clinician to the patients left) within CTM space to serve as a dilator/”placeholder” for the bougie. Once the bougie is placed, the small 5.5-6.0 ETT is advanced over it and the bougie removed. 'Fist bumbs' and or 'moon walks' may be performed once the ETCO2 is detected.

Here is a fireside version demonstrating the procedure: